Over the past 20 years, tree climbing & aerial rescue courses have changed, not just in response to advances or evolution of equipment & techniques, but also, the increasing importance of equipment standards. One area to note is that rescue on a blank vertical pole has been a mandatory part of the City & Guilds L3 C&AR for the past 5-6 years.

Pole rescue was always part of our training delivery but was often not assessed as it was down to the assessor's discretion. This fact led to it becoming compulsory which was a good thing as all candidates had to demonstrate a basic pole rescue on assessment. The downside, however, was that relatively inexperienced climbers were using spikes in sometimes dangerous proximity to one another to perform these rescues.

These rescues are often seen as complex by many students, hence this article to clarify the main steps. Students are usually not very familiar with the equipment used, and there are sometimes misunderstandings on optimal team sizes.

At Scott Fraser Training, we usually cover this course on Wednesdays as we like to treat this as a mid-week break from the open tree climbing techniques. It allows us to focus on spike skills and rescue principles entirely, with students often requesting a recap session on the last day of the course (Friday).

These rescue techniques are rightly the focus for students, but it’s also worth thinking about the main principles of rescue as this usually enables a less rigid approach from the students from the offset. We like the students to improvise to find compliant techniques depending on the exact situation they find themselves in – rather than only taking away the basic methods shown on the course. It’s also worth thinking about the rescue practices or ‘drills’ and more specifically, what has been done to make them as safe as possible while staying realistic. Everybody needs to keep the following variables in mind; limited height, is there plenty of space above the casualty, is the casualty conscious and so on.

It’s worth taking a proper look at the key parts of the spike use. Make notes on where it differs from open tree techniques and notice where you can later feed the information into rescue options.

The spikes should take away the need for footholds or handholds. Ensure that they are adjusted to suit the individual climbers level and that they are fitted securely. Use an adjustable wire core flipline or lanyard attached to the side D rings of the harness for ease.

Find a secure anchor point - you should always ensure that the tree stem is load bearing and be wary that there may not be any handy side branches to prevent a slide. This can be solved by using an adjustable friction saver and maintaining an even distance between the rings through which the rope is fed. This tightens up on any stem diameter, thus properly limiting the distance and consequences of any fall. This is a key building block of work positioning techniques.

Belay use –  A belay is a system that is controlled by another person to limit the fall from a height by means of a rope, anchor and friction management. In rock climbing or mountaineering, this would initially be from the ground with the climber placing protection as they progress up the face. Once at a secure point they, in turn, belay the second climber from above as they catch up.

We always ensure that students are secured to a belay system for their first climb using spikes, with a top anchor built up of DMM Pinto Pulley, spacer, prusik cord and climbing rope. On the ground, the belay is typically anchored to a nearby tree or vehicle via a specific base anchor or climbing rope and alpine butterfly knots. Control is via a mechanical descender such as the ISC D4 or Petzl I’D. Thes belays can be used in a range or rescues so it's a good idea to introduce students to this early, and show how a minimum of kit can be deployed to achieve a failsafe system.

Pole Rescue with a 2 person team

Two person climber & ground-crew teams are fairly common in smaller arboricultural businesses, whereas larger firms tend to send out a 3 man team as a minimum. Here the groundsman is responsible for all parts of the rescue, from the initial observation of the climber to assessing their needs & condition. They are also responsible for calling for help and then rapidly planning and executing a rescue.

When faced with a rescue like this, we need to ensure that the rescuer passes the casualty via a secure changeover to arrive in a position above the casualty secured on their own system, from which point they can –

Pole Rescue with a 3 person team (or more)

With access to a larger team, more options are available and tasks can be split, such as calling for help, meeting emergency services and arranging casualty transport to an RV point. The rescuer also has the option to delegate control of the casualties descent to a ground crew via the use of a belay system. This is a good option as we often forget that working on stems is not as clear and unobstructed in commercial practice – so a casualty might have to be guided past branches and equipment during the descent.

We find that a focus on pole rescue really helps students later on in the canopy rescue course as the only real difference is the nature of the anchor point. There's no need to use a friction saver as there might be the possibility to redirect to achieve a closer position to the casualty. 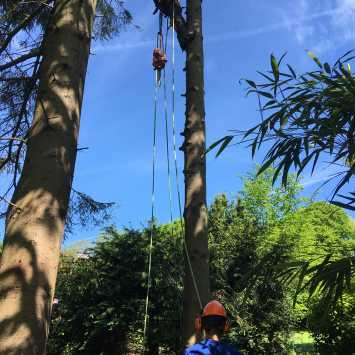