In 2018, the BWSC power plant in Sandwich came online utilizing both Roundwood and chip from the South East region to produce heat and power. We were asked to deliver some tree surgery training for their operatives who need to use chainsaws as a part of their role in sampling incoming Roundwood. This is for moisture content and contaminants to modify the shape of any occasional awkwardly shaped section.

After discussion with their training manager, the Lantra Awards ITA in Chainsaw maintenance and crosscutting was selected as being most relevant, given the wide range of other tasks undertaken. The staff were not required to progress to tree felling and associated advanced units. This 2-day training course with an integrated assessment; this is a neat way to get basic chainsaw maintenance and cross-cutting skills over to a small group. The training is to the same standard with the same content, but the assessed component is less daunting for the students. The downside is that progression to further units is not possible unless a City & Guilds assessment is completed.

On arrival, I was welcomed by the BWSC staff and taken through the site induction briefing, video and Powerpoint incorporating a quiz. I liked the introduction which said there was always time to do a job safely and right as a guiding principle, but also the detail of the many rules and procedures for the many inherent hazards within an operational power plant.

The first day started off in the conference room; we looked at risk assessment, PPE, safety features and legislation as well as getting all the Lantra paperwork filled out. Later on, in their well-equipped maintenance workshop, we looked at the engine unit components, guide bar and chain sharpening using our own Husqvarna 55XP saws.

The company had selected the Stihl MS210CE 230v electric chainsaws, they used a 3/8LP chain and bespoke chip capture setup for sampling Roundwood. This is done via a Mobile Elevating Work Platforms at various points on the load when a lorry arrives and gets weighed in. The samples are then used to determine moisture content (by drying in an oven then measuring weight loss) and sent off for specialist chemical analysis to ensure the delivered fuel meets specification.

After the first day training, the group were offered a brief tour of the facility in which I was really keen to accept. We looked at the wood yards with wheeled 360s for unloading Roundwood. The shortwood lengths are craned either from stock or directly from arriving timber lorries to a log deck; this was then dropped onto a conveyor with a metal detector - I saw a mangled 3/8 pitch chainsaw chain that had been removed. The giant wood chipper, blades, screens and the elevator taking the chip to the top of a chip silo.

Lorries with pre-chipped wood were offloaded into a deep bunker where the chip is then craned into a vast silo for storage. This was later to be dropped into the decontamination system prior to burning.

The second day of the training continued with a roundup of the main points from the maintenance day, then outside for the chainsaw use sessions. We used a corner of an overspill woodyard and created four work areas with everything from simple crosscuts to overhanging. These were supported on both ends with reduction and bore cuts, done in a range of diameter and species. This material was brought round from the other yard on one of the wheeled 360 excavators, which can also be coupled to an extra long Botex timber trailer accommodating two bays of 3m long logs. 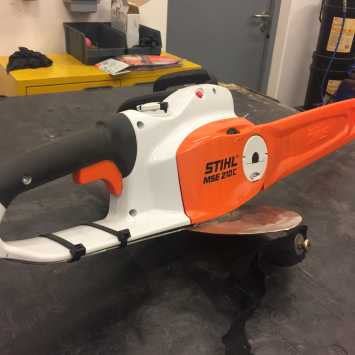