Choosing the right felling cut is a skill that takes time to develop. This third article in our small tree felling series covers the considerations made in assessing tree lean, canopy distribution and adjacent features that all add up (hopefully) to the best-matched felling cut.

Using the wrong cut in a commercial forestry and training context can lead to a range of safety issues. Some examples include increasing the chances of a dangerous split (barbers chair), less critical lack of efficiency and un-ergonomic work.

This point is reinforced when students attend the course having done a little chainsaw and felling work already but only knowing a raw standard felling cut. They learn cuts that allow them to place trees where convenient rather than where they lean and in the process become much more efficient and productive forestry operatives.

Correct cut choice can mean the difference between success and failure on the City & Guilds NPTC Assessment Unit 203 Felling Trees under 380mm. We endeavour to introduce the skills around cut choice throughout our courses gradually. Initially, the cut choice is made by the instructor, either in the stages of learning cuts on our felling simulators or felling trees on the first day or so.  Later on, students' skills are improving, and we spend more time developing a tree assessment with students individually.

A typical exercise on the final day is for each student to choose 2-3 suitable trees in their own felling areas requiring different cuts. They would then explain their choice to the group, thus practising the skills needed for the assessment but also taking a bit of the cause for indecision away of endlessly wandering around the woodland hoping to find the perfect tree.

We developed a series of simple tree lean icons to help reinforce the importance of assessing the tree form, lean and canopy distribution and wind direction when selecting the most appropriate cut or cuts.

They show the three scenarios that you will face when looking at a tree, namely it is broadly upright, slightly backwards or heavily forward-leaning relative to the desired felling direction required.

In simple terms, an upright tree is best felled using a standard cut, a forward lean with a dogtooth and a backward lean with a split level. Other factors consider tree species, size, physical access around the tree base, hazards in the escape routes, the extent of lean, slopes and operator skill and experience. All of these lead to a more subtle or considered cut choice detailed in the table below.

How to assess tree lean

Trees seldom grow perfectly upright, and making a judgment on any lean of the stem or canopy bias takes skill acquired over time and from things not quite going to plan.

We encourage students to look at their target tree from more than one position and, since most people will look at close quarters, we also suggest that they get perspective from a view further away - say at half the tree height. This process is beneficial in several ways. The impacts of adjacent trees reduced or averaged the increased time taken often results in a more considered decision or the discovery of additional hazards or issues that need to be taken into account in the felling process.

How much lean is too much?

We are often asked when a backward lean becomes a forward lean; this depends on both the intended felling direction and the lean extent. Ultimately you need extensive experience to predict with confidence the lean level that still allows a split level cut or Danish to move the tree against the lean direction, which is linked with the practical skill required to execute the cut precisely. In short, even a modest lean might be too much when a poorly made cut is made. In our introductory training courses, we try to build up the difficulty level, so tree lean is increasing in line with cutting skill.

What about the weather & wind direction?

A standard felling cut may be sufficient for an upright tree on a calm day, but it might require a dog tooth on a windy day.

Stem lean covered above needs to be considered together with the branch distribution. On conifers (plantation grown at the thinning stage) it’s more likely to be naturally considered together as the branches are more uniform, smaller and seen as integral to the tree form. Of course, a mature Scots pine may be nearer to the broadleaved character described below.

On broadleaved trees, branches may be significantly longer, and more randomly distributed than the forestry conifers described above. The canopy may also exhibit asymmetry, significant forks and stem divisions. Exceptions to these generalisations with upright Lombardy poplars do exist so treat the above discussion as an introduction to assessing canopy distribution and the cut choice that follows.

Most of our woodland practical sites have trees that will be nearby, whether they are to be thinned (removing a proportion of the trees to realize early return and develop space for the remaining trees to grow) or clear-felled which is standard on our sweet chestnut coppice sites.

It’s essential to look carefully at the branch network of your target tree and those adjacent and firstly make a logical order for felling to minimize interactions and difficulties and then assess whether the chosen cut will still perform.

Escape route choice, dense multiple coppice stools or your personal preference might mean that a different cut might be correctly chosen by a range of operators. 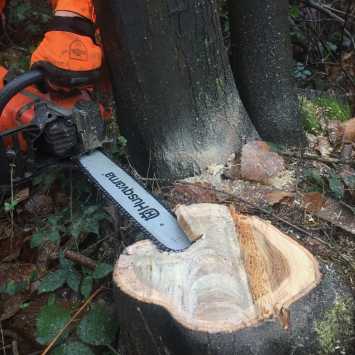