As Inventor of the Rope Wrench and rope runner, what Kevin Bingham has to say about SRT is obviously of great interest so when I heard he was coming to the UK I made the effort to see his presentation.  I was especially keen to hear Kevin discuss working with 2 climbing systems.

Running our own SRT training courses, the awareness workshop under the Arboricultural Associations Branch network and being a reflective learner I also wished to see how others deliver an a SRT day and mainly to hear directly from Kevin about his experiences that I went along to Treekits workshop on Sunday, with Chris Fletcher.

Kevin started by explaining that he was not delivering a training session, but sharing his experiences and insights. He then took us through his pre career inspiration and the career in climbing. Interestingly in a parallel to my own introduction to tree work he mentioned a storm in Denver where afterwards he got work without any real experience – similar to 1987 in south east.

He progressed from a basic 3 knot system (as used by our trainees on a basic tree climbing course), onto a split tail, then with micro pulley and then footlocking and early intro to SRT for tall tree hunting! I often present a similar session to those learning about climbing, it gives a really useful context for their learning. He then recounted his early competition experiences and injury and interestingly said that footlocking was un-ergonomic, exactly what Paola Bavaresco said back in the early 2000s. He went on to say that footlocking was often seen as a modern technique but was to his knowledge being used in the 1930s by Davey Tree Care workers, he also linked the use of a cord on a footlock line to our SRT. He demonstrated how whilst not ideal, it was possible to footlock down a line too, and that to grab above the hitch in his experience resulted in a frustrating rather than catastrophic another misconception. He also expressed surprise that many climbers were keen to use the rope runner, and yet had not even explored a simple pulley to tend a basic friction hitch!

Kevin recounted a comment made by Tom Dunlap at a TCIA conference in 2004, Tom suggested that the holy grail was to get a hitch to work successfully on a single line – this set the seed for the  rope wrench, but as Kevin returned frequently during his presentation, he could have just bought a unicender! Not much changed until around 2006 and the hitchclimber pulley and floating bridges on climbing harnesses, with looser hitches. In 2007 a combination of competition climbing and sport took it’s toll and injury forced a fresh look at how to do things, which at first was around floating, lowerable anchors often using pulleys., but this was back to body thrusting.

The economic crash in 2008 forced Kevin to seek work in Texas working on a hurricane clear up, in hot and humid conditions in what he described as a big thicket, paid by the tree, and he got a ladder which was definitely the quickest way to get up but not always possible to deploy. He used a friction hitch on a single line , which although hard to break was not dangerous as is often described, but swinging jumps were not possible. Then came the beginning of the evolution of the Rope Wrench with the use of a figure of eight and a revolver karabiner above the hitch tethered by a length of cord, but it needed un-weighting to install/remove. Inspiration from the cavers reference On Rope saw Kevin play around with a range of ascent systems, but he was always frustrated with the up only function of toothed ascender based systems. Then he tried a ring spanner or wrench, which despite shredding the rope due to the aggressive surface did work perfectly in reducing some of the friction on the hitch below. There followed a series of adjustments and development including wood, some of which exploded until he had help from Zak Kinner to develop the metal wrench and then later the stiffer tether to prevent it collapsing onto the hitch.

Kevin slightly surprised me when he said the main benefit of SRT was in the ability to redirect rather than to ascend fast, explaining that whether it was 30 seconds or 5 minutes it didn't make much difference. I would have thought this was together with the ease of ascent one of the main benefits. He then demonstrated a few redirect options outside, before we went into the shop for a pizza lunch.

After lunch we were shown a plethora of redirect options, some described as sketchy, some even more worryingly very sketchy. Less is sometimes more, and whilst this did give Kevin a break, fewer methods with a clear advice on safety would have been better. It would have been great to have heard some opinion on which satisfied the Work @ Height Regs. test for work positioning or indeed if the technique was work positioning or access? The ability to ground belay rescue or self rescue was prevented by some redirect options and again this crucial info was left out.

After this session was the moment I had been waiting for, a discussion on how to use two SRT systems and how Kevin had arrived at this point. He described a SPRAT (society of professional rope access technicians) course and approach which sounded similar to our IRATA levels and 2 rope approach, and then the curiosity or wish to test 2 systems partly form a safety perspective but maybe also as a challenge. This was an interesting approach as the benefits were promoted around triangulating for branch walking ease, I was surprised that this was seen as such a revelation as I deliver this fundamental concept on day one and then days 2-5 of a basic tree climbing course, albeit with the use of 2 doubled rope systems. Maybe this knowledge is forgotten once the NPTC ticket ink has dried………I felt disappointed that the use of 2 systems was not seen as offering a fundamental improvement is safety, nor was the fit with our own [email protected] Regs developed in discussion.

The Rigging Wrench was introduced, a combination of a DMM Pinto pulley tethered to a rope wrench, so that when the rope is pulled it goes through the wrench bend, adding friction to the system, but importantly at the top of the tree rather than the bottom as with a bollard or capstan. Benefits here are that the effect of force multiplication at the anchor point are reduced, and this effect could easily be achieved with the use of an Italian hitch or figure of 8, this technique was first shown to me in the early 2000s by Paola Bavaresco on his rigging master class, and in this course the idea was to have no force multiplication by managing the friction entirely at the top of the tree. The rigging wrench is a good idea however, although the limiting factors are that the rope is quite difficult to pay out, goes through a tight bend so at higher loadings bend radius needs to be considered and as yet there was no idea on the SWL, so from a LOLER perspective it fell short.

Overall I really enjoyed the day, and whilst SRT is seen as being an up to date way to climb in many ways this workshop took me back in time to ideas that I had seen presented 15 years ago. The lack of legislative emphasis might just be peculiar to my own taste. 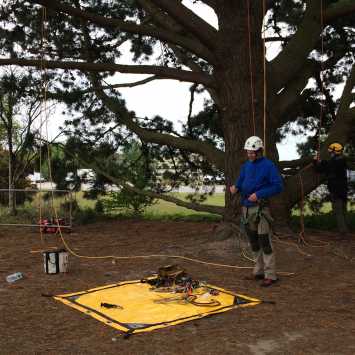 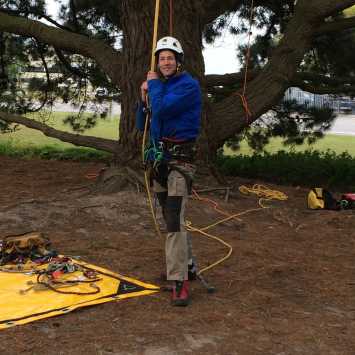