This sixth article in the series looks at the dog-tooth felling cut (also known as the bore & sever) in more detail, including its range of application.

Remember, this written article is no substitute for the personal delivery of tree felling skills and should be seen as supporting that primary personal delivery. In short, whilst this cut is not that complicated to learn, it is essential to make the cuts from safe positions and have a prompt escape to a safe position to reduce the chance of being struck by any splits that develop.

As previously discussed, this cut is ideally suited to trees with a significant forward lean or with a biased canopy where the use of a standard felling cut would more than likely result in the tree either: at best moving before an ideal hinge was formed or at worst splitting up the stem (so-called barbers chair).

The risk of a tree splitting is one of the most significant safety points we talk about in our training courses. Here, the initial tree assessment and decision to use a dogtooth cut could be the most significant decision in mitigating these risks. In contrast, for trees with backwards lean, the incorrect cut is more likely to result in inefficiencies than danger.

Using a dogtooth cut where the forward lean is minor can work, albeit with a less dramatic or defined “break’ when the final cut is deployed. Using where the tree has been incorrectly assessed as forward-leaning can lead to difficulty developing the required leverage with wedges or felling levers.

Of course, all of this is subject to detailed tree, species and site assessment beyond this article's scope or any written description of a practical skill.

As with all felling, prepare the tree and immediate area for felling via brashing, removing or cutting material in the way and thinking about the intended route of the tree – remove any smaller material likely to deflect or cause low-level hang-ups.

Students generally pick this cut up quite readily but often can’t entirely control the saw even though they know what the cut should look like.

As with the split level, chain rotation can pull the saw towards the kickback zone on the upper portion of the guide bar nose; this can easily wipe out the hinge during the bore cut and result in a crushed guide bar and trapped saw. Guard against this force and maintain spatial awareness of the guide bar in relation to the hinge – practice in a non-critical felling simulator.

If the hinge is too thick, this can result in a split, as the tree de-laminates at the point behind the hinge and the split progresses up; this can be dramatic.

The final severing cut may not be entirely lined up; this can steer the tree to the side where holding wood remains. 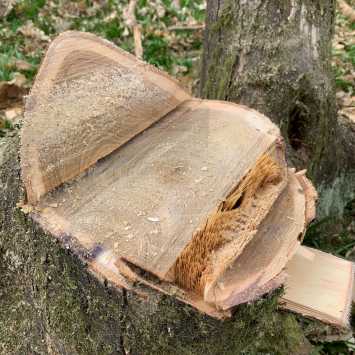