Recertification of its instructor network is one of the ways Lantra Awards maintains its high standards. Although the recent aerial tree work re-cert in Surrey was poorly attended, it was without a doubt a worthwhile day for the four instructors present.

Lantra Awards were historically the only awarding body offering training in a wide range of land-based disciplines. Until this day, their quality assurance is based around a range of measures from instructor selection and evaluation through to periodic re-evaluations.

Since becoming a Lantra Awards Instructor in 2005, there was a steady stream of updates and TA Visits for a few years. However, from around 2012, it has drastically decreased and over that entire period, there has not been one recertification event. It seems that LA has well and truly pushed the recertification button as over the past 12 months I have attended:

Re-cert fatigue was perhaps one of the reasons that only one of the two Kent dates offered was taken up and that one was only partly filled with three other Aerial tree work instructors from the South East.

We arrived at Fryland Wood Scout Activity Centre, near Croydon, and met Technical Standards Verifiers Richard Allmond and John Trenchard. After scoping out the trees suitable for climbing, Richard and John gave a comprehensive introduction and outline of the day, including assessment criteria and expectations in the Scout classroom nearby.

Richard commented that there had been a relatively low take-up for various reasons. However, following his previous LOLER update ‘roadshow’, he believes climbing kit standards are generally higher with many instructors taking the opportunity to update their breadth of equipment and depth of knowledge around various components.

There was also a wider discussion on the best way for standards to be maintained, with a suggestion that more frequent genuine updating and a module-based approach to adding smaller skill blocks might well be effective and positively received. The topics suggested were Single Rope Technique (SRT), as the only one on offer is the TCIA US-based course, advanced climbing equipment – an in-depth look at Petzl products or mechanical devices and ergonomics for tree climbing operations and even throwlines…

This led into an equipment check comprising:

Richard then outlined how this “planned triple approach” had not quite worked out for the aerial tree work. The updates and standard settings are meant to be followed up by training and then recertification. This did not happen because the middle part was poorly organised. This was especially disappointing as the Lantra Awards whole business model is all about quality training in small groups. This was not seen as appropriate for the instructor network since the lengthy and complex document that had preceded the re-cert event, attempting to clarify the assessment criteria for the events.

Pole rescue was always a contentious issue, and despite the above comments, Richard said that a basic set up would be assessed.

Rescue from the crown periphery, scenarios where the rescuer's system fails, climbing above a main anchor point and transitions into and out of redirects were also to be demonstrated. A welcome move on from the often unrealistically simple rescue scenarios we teach and practice.

There was an emphasis on the importance of thinking and developing performance criteria across the industry. This will be utilised by all stakeholders rather than the current way of thinking which can be a little reductive. However, other attempts by the Arboricultural Association in the ICOP, Future Technical Guides and Work By City & Guilds were dismissed a little too readily.

John Trenchard commented about the Lantra Awards management churn and that the verifiers were often struggling to sell the above measures to an ever-changing management group. He did mention a long forgotten project of a Lantra Rigging workbook that had not been ‘found’ and was due to be rolled out shortly.

Suitable trees were selected and assessed, rope installation by throwing was demonstrated with various tricks for moving into the stem (rolling/bowling). We also had to demonstrate unfurling and throwing bundled coils. All fundamental skills but perhaps they can get lost with the focus on exciting equipment.

Next was a throwline installed system, and one of the requirements was to uninstall this by lowering rather than just crashing it out onto the floor as we have done for many years with cambium savers. This requirement and the need to place a rescue load on an EN795 anchor point had me thinking that for the best outcome, I had to use an ART Ropeguide Twinline. For those of you who are unfamiliar with this equipment, it is a low friction pulley for a doubled rope system with a pre-installed SRT line for either work positioning or rescue - certified for two users. Ideal!

Climbing course delivery came up later over lunch, and there was a suggestion that understanding was the best outcome in delivering a tree surgery training course rather than box ticking. There can be a danger in preparing for an assessment such as the City & Guilds unit that they become the narrow focus, rather than a thorough understanding of the principles, that can be applied to many scenarios.  The benefits of low student ratios, extended course durations were acknowledged in giving benefit to these aims. Strength is not the only factor to consider in kit use, always think about how it is to be used and consider function before failure.

A classic example of this is the wirecore flipline with a damaged rope – it’s powerful, however, it does not offer a smooth function hence consider the functionality before any failure…good advice.

Still on the ground, these thrown ropes were set up with a range of hitches, from primary blakes 3-knot system prussic through to mechanical options. On the rope guide, we used the zig zag and spider jack three setup. With pre-climb function tests complete we then ascended. We advanced the anchor using a secure changeover and set a final anchor point, in my case an open oak canopy with around 6-8 mainly ascending limbs with the canopy mostly on the edge. To climb above this main anchor, a separate CE Lanyard system was advanced to some less substantial anchors; the limitations of these were discussed compared to the more convincing main anchor below. A redirect demonstration was required, and the key here was to enter and exit and managing the inevitable slack that is required to feed the rope in. I used an ISC double swing cheek pulley ideal for maintaining low friction properties of the rope-guide. I generally favour two separate rope systems in a situation where a redirect might be required, so I used this method later on to develop a simple branch walk. De-installation of the entire climbing anchor is a simple matter with the rope guide.

Lunchtime was relaxed outside in the sunshine – shame about the nearby grounds maintenance men disturbing the peace.

After Lunch, Andy Green and I worked on Aerial Rescue. Firstly I rescued him from a sweet chestnut tree by deploying our good 3 stage ladder to make the ascent faster and more ergonomic while still being secured on a climbing system. The climbing system was deployed by a throw line.

Canopy edge rescue was achieved via a second system to manage swing. Later a failed rescuers rope was simulated, the purpose of this was to ‘switch’ the rescue making use of the casualties undamaged climbing system. All scenarios were covered from rope undamaged, rope being too short, an unconscious casualty and inner/pouter positioning.

Pole rescue followed with the usual two-person option (using thimble saver), and other rope choked off around the stem to prevent a slide down the stem. A neat trick using a thimble on the wire core to clip the other side was also deployed to make tightening up on the stem easier on changeover again all aimed at minimising falls on stem manoeuvres.

Belay options were last on the list and after demonstrating simple prusik, munter/figure of 8 options and mechanical (ISC D4, Petzl I’D). Richard set up a neat system based around a hitch climber with the friction managed above the VT or whatever friction hitch. The advantage here in that students already have used this very set up to manage a long descent minimizing heat build up on their friction material.

All in all, it had been a valuable day, made more so by the lack of take up among the local Lantra Aerial Instructors and the presence of Richard Allmond.

This guide is to provide clarity to the candidate in terms of the skills and knowledge they are required to demonstrate at the Re-Certification event and as a guide to the Technical Verifier.

The following information outlines the content of the skills assessment. Candidate’s are expected to

demonstrate practical skills and have knowledge in the following subjects.

Set up personal fall protection systems at ground level around the stem prior to initial ascent.

NB: During ascent 2 systems should installed where practicable. At least one of the systems should be configured so that it ensures sufficient fall protection is maintained. Examples include:

2. Climbing line/lanyard installed around the stem in DRT or choked

3. Climbing line/lanyard double wrapped around the stem when

However, the installation of a single system attached either centrally (EN813) or from the side D’s (EN358) may be permissible when ascending a large and/or heavily tapered stem where egress may not otherwise be practicable. In this scenario, a careful assessment of the

risks must be made to determine whether:

1.        Egress is practicable where the system is either connected via the central attachment point (EN813) or the system is double wrapped and attached to the side D’s (EN358)

3.        The increased surface area contact between the stem and the climbing line and or degree of stem taper/profile ensures sufficient fall protection is maintained

NB: A suitable change over procedure must ensure that sufficient fall protection is maintained throughout the change-over/rope advance procedure.

In this environment, climbers should not normally be attached solely to their harness side D’s (EN 358) unless the system is ‘double wrapped’ around the stem. However, side D attachment (without double wrapping the system) may be permissible on large and/or heavily tapered stems where it has been assessed that egress may not otherwise be practicable. However, in this scenario, a careful assessment of the risks must be made.

EG: The operative should determine whether the increased surface area contact between the stem and the climbing line and stem profile ensures that sufficient fall protection will be maintained. 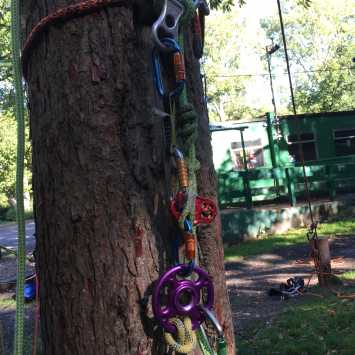