Home>Scott Fraser Training Blog>Rope access or SRT work positioning - are they the same or different?

Rope access or SRT work positioning - are they the same or different?

This summers Arboricultural Association newsletter contains an update on the widely anticipated Technical Guides. These refresh the existing guidance (Guide to Good Climbing Practice & MEWPS) that many will be familiar with and expand into new areas, this includes Tree Rigging and Cranes. These documents will be a welcome resource to the practising arborist and follow the principles set out in the earlier Industrial Code of Practice. First, to be published are the guides on Tree Climbing & Rescue and Tools in the Tree.

In the AA Newsletter article, Simon Richmond reported on a technical hitch in gaining endorsement from the HSE due to their concerns over the definition of SRT Work positioning. This evolved from the Industry Code of Practice document at a time of increasing use of SRT for movement and work within the canopy rather than purely for access.

Due to Peer Review work on the Arboricultural Associations Industrial Code of Practice (ICoP) in 2013 and the AA branch network single rope technique workshops, it focused my attention on the UK legislation; specifically the work at height regulations 2005. These regulations set out requirements to avoid work at height where appropriate and then choose the correct system to work at height, this is interpreted in the ICoP in a handy table format.

Working at height requirements are covered in detail. For instance, a second or back up line differs depending on whether you are using a work positioning or a rope access system.

It’s useful to review how both the industry has evolved and how the legislation is framed to understand it’s current position. Developments in other industries as well as from recreational climbing are also equally important in the advance of equipment & techniques.

This evolved into a split tail system during the 1980s. I regularly saw this used in conjunction with free climbing to the top of a tree at which point the climber would tie in. Only one rope is used, but it can appear that two are connected as this system is ‘doubled’ over the anchor point and then tied via the friction hitch to the climber. Mechanical advantage or leverage is available to move upwards via body thrusting which is reasonably ergonomic over short distances due to the high position of the friction hitch.

Using rope wrapped around a rope was not an idea developed in arboriculture. The prusik is generally considered to have been invented by the Austrian mountaineer, Kark Prusik, and was shown in a 1931 Austrian mountaineering manual for rope ascending the rope. Later developments in response to recreational caving needs, led to the use of nylon ropes and for Fernand Petzl to build a mechanical ascending tool for Bruno Dressler. In the 1970s, Petzl established a caving equipment manufacturing company that bore his name and which has recently produced the latest SRT device the Chicane.

Doubled climbing systems were the norm for many years and evolved with the addition of micro pulleys to tend or fairlead the rope for easier one-handed operation. The innovations around the use of Petzl P05 pulleys and the need to make space with hand-tied prusiks led to the development of the hitch climber pulley. Foot locking a doubled line was gaining popularity but remained a more specialised technique due to the skill and specific strength required to perform it. Smaller diameter and more technical heat resistant prusik cord materials were also being used.

In the mid-2000s, an associate of mine, Paolo Bavaresco, was on a search for a more ergonomic, minimal effort and less damaging technique to ascend taller trees, he found SRT. In 2005, he introduced me to these techniques.

These techniques utilised mechanical ascenders, a carefully constructed system based on chest (Petzl Croll) and a hand ascender linked together with foot ascender (The Frog). I used these techniques for access over many years but would switch to conventional doubled rope systems once at the top of the tree.

This was around the time of the Work at Height Regulations and the Arboricultural industry’s attempt to reconcile these regulations with the determination of rope & access techniques report where the conclusion was that two rope systems were generally inappropriate to the industry. Importantly, the work at height regulations set out different requirements for work positioning and access. They are defined as follows:

A work positioning system shall be used only if either:

Work positioning system - a personal fall protection system which enables a user to work supported in tension or suspension in such a way that a fall is prevented or restricted. (the assumption here is that a fall liable to cause injury is prevented)

Crucially for our industry, we have a ‘get out clause’ on the requirements for two systems in that work positioning should have a back up unless all practicable measures are taken to ensure the system does not fail. (it’s difficult to imagine setting up a system where we didn’t take all steps to ensure it didn’t fail)

However, in part 3 of the regulations, rope access is treated differently.

lines, of which one (“the working line”) is used as a means of access, egress and support and the other is the safety line;

b)  the user is provided with a suitable harness and is connected by it to the working line and the safety line;

c) the working line is equipped with safe means of ascent and descent and has a self-locking system to prevent the user falling should he lose control of his movements; and

d) the safety line is equipped with a mobile fall protection system which is connected to and travels with the user of the system.

2. Taking the risk assessment into account and depending in particular on the duration of the job and the ergonomic constraints, provision must be made for a seat with appropriate accessories.

3. The system may comprise a single rope where:

(a) a risk assessment has demonstrated that the use of a second line would entail higher risk to persons; and

(b) appropriate measures have been taken to ensure safety.

Our industry research and opinion were summed up by the following extract from the Determination of Rope Access Report:

The AA Guide to Good Climbing Practice had the following to say:

SRT was evolving into an alternative way of working in the tree. It’s served more than its intended purpose; which was for access with the Rope wrench,  Unicender, Rope Runner or Bulldogbone. This point coincided with an attempt to make more arborists aware of the access systems.

During the development of these workshops, the [email protected] Regs requirements were incorporated into both theory and practical demonstrations. Francis Hirst, the HSE inspector for arboriculture at the time, attended the workshop delivered at Wisely in 2015. He had made no adverse comments on the way SRT was presented in the classroom session or during the practical demonstrations. We demonstrated SRT both with and without backups and discussed where the material risks arose compared to a conventional work positioning system utilising a doubled rope system.

I’ve tried to find out how we arrived at these two definitions but have not found the answer. Maybe, it’s to do with the relative ease in which a predominately vertical IRATA type movement can incorporate a backup and the perception that while having part of the body on a tree structure it would be safer than just hanging? Also, IRATA has a two rope system as its fundamental safety measure.

Later that year at the Arboricultural Association Show, Dr Andrew Turner, an HSE Inspector, attended a mini-workshop on SRT I presented. This was really a shortened version of the one delivered to the branch network, and he said that nothing stood out, although he did not have the detail of the [email protected] Regs at fingertips but would look at the intended outcome of the regulations in considering our presentation on the merits of backups in the context of WP or Access.

It seems the AA is pushing to have SRT classified in the same way as to work positioning, on the basis that there is no objective explanation of why, in our industry, we are any safer whether the rope is stationary or moving.  Therefore there wouldn’t be any conflict under the [email protected] Regs, and we await the outcome with interest.

In perhaps an unexpected viewpoint, Kevin Bingham (inventor of the Rope Wrench is seen as an SRT WP pioneer), advocated the use of twin systems following his experience using American SPRAT industrial climbing principles. Maybe we’ve got this debate the wrong way round and should be asking how we can climb with two anchor points? 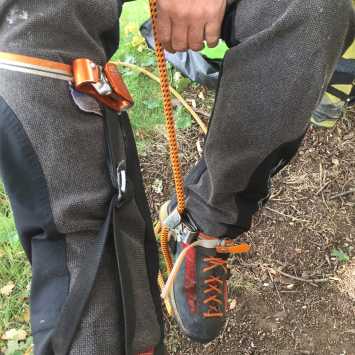