Tree climbing training and assessments have gone through various evolutions over the years. This varies from the incorporation of pole rescue to changes in climbing equipment technology. These can often be seen as following the changes in current emphasis or paradigm.

All of the above changes mean the standard five-day tree climbing course is already bursting at the seams, especially for novice students. More radical change with a move to compulsory two rope working has also impacted climbing training and assessment. Whatever the eventual subtleties of the Arboricultural Associations Technical Guides due out imminently, it’s difficult to see how in a training or assessment context a move back to relying on a single point of attachment could be justified. So we see these changes as being permanent.

Various solutions have been heard in response to the above challenge of packing more content into the same short timeframe. They mainly involve either increasing the course duration, splitting up parts of the content, over the years they have cropped up in somewhat similar guises.

The Coronavirus pandemic and the likely continuation of social distancing measures has made conventional aerial rescue practices untenable in training or assessment context – and in searching for a possible solution we looked at the use of a manikin to replace the previous universal use of other trainees as ‘casualties’. Manikins have been around for a long time & utilised in other rescue disciplines and it’s surprising that the arboricultural industry has not adopted these resources earlier.

A wide range of options was reviewed, and with advice from Ian at Sussex Trauma (a former firefighter), we decided to invest in a 50kg Ruth Lee Work at Height Manikin. This is an adequately specified product specifically designed for work at height. There were cheaper brands and more substantial options from Ruth Lee. Still, we thought a robust specialist product with a realistic but not ridiculously heavyweight would be the right balance of rescue challenge for a range of students, considering the lack of help or cooperation typically seen in previous rescue practices. Besides this, manikin is designed to be suspended and has weight distributed correctly in the legs, torso, arms and head.

After running a couple of basic tree climbing & rescue courses with this method of rescue we can report on the generally positive impacts:

There are a few minor downsides, however. For example, the manual handling implications of moving this deadweight to and from the site and then around the different trees in use. When this is in place, the hauling systems make light work of getting it into position up in the tree. We plan to set up a sack barrow for this movement and make lifts onto vehicles for two people.

Another criticism of the manikin is how to position it on a pole to force the student or candidate to ’pass’ the legs by changing over, or indeed that they are not wearing spikes. This is an interesting point as it shows how we are at risk of missing the bigger picture by being stuck in our rigid rescue boxes rather than building skill and confidence in rescue problem-solving. In a real pole rescue is it guaranteed that a casualty would be positioned conveniently spiked in? Could a casualty be hanging on a blank pole section without spikes?

While attempting to isolate students with their own kit in separate trees, they to some extent touch the same manikin. We produced a set of 4 belay kits including industrial belay devices, pulleys and connectors and base anchors, all reasonably expensive but it was not realistic to invest in 4 manikins.

We trialled two approaches in assessment in the light of the above two rope working and COVID challenges, to give each candidate every opportunity to demonstrate their skills within the allocated assessment window.

The first was to drop down to two candidates per day which is half the expected number. By allowing this extra time, the assessor was able to set up the manikin for the rescues. On paper, this might be viewed as half the work, but it’s not as simple and the time is influenced by many factors, not least the climber skill level. Even avoiding having to pack up and travel to a separate site for pole rescue can save an hour. Both changes had apparent impacts on the assessment costs.

The second approach was to have a technician deploy the rescue manikin to allow the assessor a distraction free day.

A constant challenge of our tree work training is deciding how much information to deliver to each student to not only help prepare them for assessment but also set them up with safe foundation skills. With so many ways to construct a belay, we decided to keep this as simple as possible by providing a snake anchor, karabiner and industrial belay device for use in creating a belay for either rescue or to create an anchor point for the manikin to be hauled into place.

It could be argued that a knot and prusik based system should be the default as it is unlikely many tree firms have the kit we are using. Ideally, we would teach this on top of the above version, but for training and assessment purposes, we are attempting to deliver meaningful information over a short time period.  These industrial devices are also safer and more user friendly than a munter/prussic combination.

On the plus side students will see a basic hauling system over the entire course.

In conclusion, the City & Guilds assessment needs a rewrite to keep correctly updated with the changes in the two rope working and social distancing. For example, if students have been working on two systems, their necessary rescues need to involve simplifying the potential four climbing systems, and the historically more complex rescues are more comfortable with the apparent donation of one rescuer's system to the casualty.

Despite our best efforts to remove rescue types from the boxes or labels that are in common usage, they can be a handy way to navigate through the options.

Importantly, are we missing any more likely scenarios in our tree-climbing rescue training? It could be argued that skills for self-rescue and first aid in the tree are more practical.

Building hauling systems or isolating a casualty in the case of neck/spinal injury is another development point for our somewhat limited menu of rescue options. Another point here is that should we rethink practices such as connecting a casualty to our system at all when that could be a limiting choice should things go wrong on the descent. 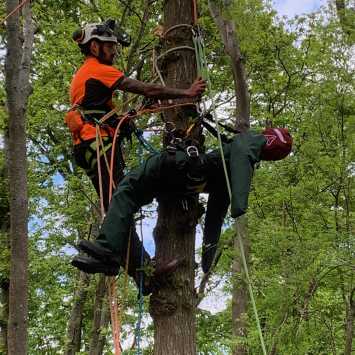