This blog outlines two recent repairs carried out to our forestry machinery. The components and principles are used to develop broader machine knowledge and skills to fix problems when they inevitably occur.

These jobs are beyond the scope of the machine routine maintenance typical of our many forestry and arboricultural machinery courses. Still, they help understand the hydraulic system better and be aware of some of the longer-term maintenance activities required with ownership.

It was important for both jobs to safely stop and isolate the power source before starting any investigation or work. This was achieved for the Kindling machine by removing the PTO shaft and the Botex trailer separating the Valtra 6400 base unit it is generally attached to.

It was time to replace the hydraulic oil, stored on this machine in the central structural pillar. Oil is supplied to the tractor-mounted PTO pump via a suction filter and large diameter hose, pressurised and then enters the large spool valve block mounted on the back of the tractor. Valves are controlled from inside the cab, with the hydraulics safely outside the operator’s position. Oil is then directed to the numerous rams that combine to move the grab, boom, dipper, boom extension and slew the whole arm into the positions required to pick up bundles of wood. The oil then returns via a pressure filter back into the tank.

After draining the bulk of the oil, the drain plug was removed, and all remaining oil and debris sucked out. After arranging for proper storage and disposal, the open hose was sealed in a plastic bag and the access panel bolts removed. The old seal and gasket were removed, the whole assembly cleaned and smoothed. A new suction filter was fitted and the gasket fitted with RTV silicone. This was then carefully replaced, and all fixings tightened in a diagonal order to an equal low torque setting. PTFE tape was wound onto the thread of the tank drain plug, and it was fitted tight.

All that remained was to replace the oil with the correct specification and the pressure filter.

After nearly ten years of ownership, this hand machine had proved trouble-free, reliably churning out kindling for supply to our firewood customers and a few wholesale clients. We use lower value softwood produces on our felling under 380mm course such as western hemlock produced at our Lamberhurst, Kent site or larch from the Woodland Enterprise Centre in Flimwell East Sussex.

Simple in operation around 175-180mm log lengths are loaded on a chute and progress to where they are split. A right-angled splitting knife like a triangle without the base cuts in two mirrored positions. When the knife retracts the belt advances, by an amount that can be set by the operator and the process is repeated; thus the blanks are split in both directions, and the end result is small lengths of kindling. This conveyor movement had become erratic over time, but as with so much gradual change, it was hard to pin down when this changed.

I vaguely remember Ken Reid mentioning that they gave little trouble except for the wear of a couple of brass sliders when I had a demo at the Bentley Woodfair, but a quick call to Wilsons and they were able to diagnose the likely problem. Removal of the side panel revealed a small diameter brass wheel at the top of a hydraulic control valve. This valve allows oil to flow to the motor powering the infeed and stops this motion when the splitting blade is in action. The wheel's axis has worn out so it was positioned lower than it should have been, hence the valve was not acting reliably. Because the wear was eccentric, it sometimes worked – an annoying fault.

Wilsons dispatched the part, and it was a straightforward job to release the valve spring base free the central section and slide out the pin. The wheel-mounted into screw-in support and was swapped for the new one, which came as part of the repair kit. The new wheel was fitted, and the axel was pressed in and the end burred over to secure. Refitting was the reverse of removal only slightly trick due to the small allen screws and overcoming the spring power. The top section had a seal and metal cap, so all you see in the photos is the brass wheel.

A quick test and all was well, the conveyor moving so much that I had to turn the flow valve right down to the minimum, which was exactly where we used to have it set. 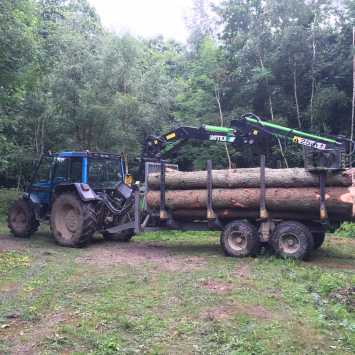